with Kaffee and Kuchen and Signing Session

With a particular sense of humor, Ruf mich an is based on a collection of 35mm photos of tied women. Printed on different techniques, the photos remind to the aesthetics of the street poster, a particular feature of Berlin.

“Call me” (in german), is printed on the back of some of the original photographs next to an old phone number.However this is one of the few hints about the identity of the women in the images, the photographs likely date from the late seventies and judging by the shots one could guess that they were probably made under their consent. Some of them could be found as odd and humorous, the exaggerated terror gestures and a poor performance certainly give a sense of comedy. Nevertheless, they are still fascinating thanks to its disturbing elements.

While nowadays the internet provides easy access to pornography, the artist rescues analogue materials and turns it into a "collectible" product. 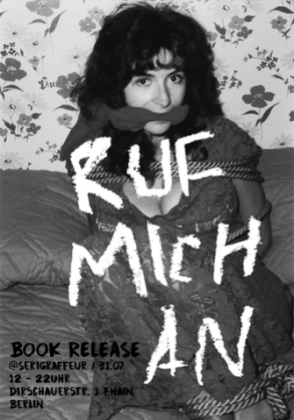