We are happy to finally invite our Friends from PRINTSHOP UNION as they choosed us to show their newest Silkscreen Posters.

For those who don't know them yet The PRINTSHOP UNION is a collaborative project founded in 2011 by the artist duo Monkey & Aargh.

Monkey has a background in graffiti and used to be a member oft the CBS crew. Aargh has played a variety of movie monsters. In an attempt to escape this cliché he worked several jobs, including as a zookeeper in the Berlin Zoo.

Their collaboration started by painting canvases together but over the years their field of work got wider and now includes objects, installations, performance and video art. Their works often relate to their roles in society, pop culture phenomena, and famous characters. 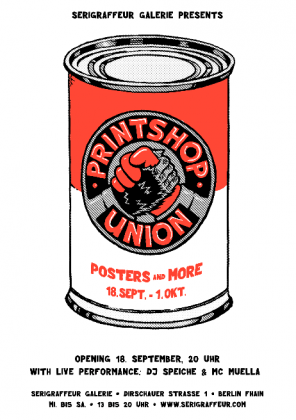